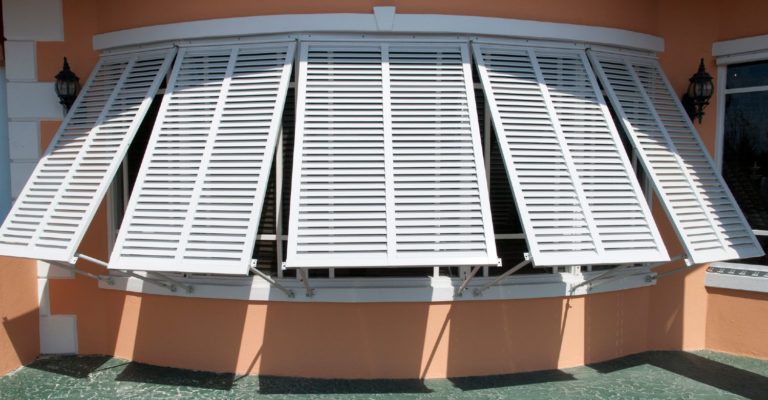 Bahama shutters can be made of aluminum, steel, or sturdy wood. They’re mounted on top of windows on the exterior of homes in certain areas prone to extreme weather. We’ve collected all the most interesting facts about Bahama shutters, so make sure you read on if you’re currently in the market for new Bahama shutters for your house.

What are Bahama shutters?

Bahama shutters are one-piece window shutters that are mounted on the exterior walls of a house. Bahama shutters are known to give maximum shade along with ventilation, which is why they are quite popular for those who live in tropical areas where most days are sunny and hot. These areas are also prone to extreme weather conditions.

They are hinged over windows, which makes it easy to pull them over the windows when a storm is approaching. Because they are secured to the wall itself, Bahama shutters remain sturdy even during strong winds, as compared to other types of shutters that could come loose because they are mounted on the window frame instead of the wall.

On a normal day, Bahama shutters are known to provide protection from intense heat and immense rain. Closing the shutters when it’s too hot can have a natural cooling effect. Closing them during stormy weather can provide your windows protection from strong winds and debris.

How do Bahama shutters work?

Bahama shutters are propped open with a telescoping arm, allowing them to be partially or fully open or completely closed for privacy, depending on how you want it. Because of this, you are able to control the amount of light that enters your house through the windows.

They are as simple to use as windows, making them a great option for quick protection against many different weather conditions.

Do Bahama shutters keep the rain out?

Bahama shutters replace the need of boarding up your windows when extreme weather conditions are approaching. Shutting the windows and closing the Bahama shutters altogether, could provide a better protection against heavy rain. Old windows may leak a bit, especially when the downpour is followed by strong winds, and water damage could easily occur from just a small amount of water.

While Bahama shutters isn’t a guaranteed solution for protection against rain, they do indeed provide an extra layer of protection for just a fraction of the cost of having brand new windows installed.

Some Bahama shutters are made purely for decorative purposes, while other Bahama shutters have been built for the purpose of protecting a house from storms. In states like Florida, where high-velocity storms often pass by, the building code may require that proper hurricane protection is in place to keep you and your family safe during a storm.

Hurricane-grade Bahama shutters work in place of having to board up windows every time there’s news of an approaching storm. They protect the windows from shattering, thus keeping buildings and their occupants safe. It also takes less time to close a Bahama shutter than it does to hammer wooden slabs over windows.

If you live in a state that often has hurricanes or other kinds of bad weather, you might want to consider installing hurricane-grade shutters or impact-resistant glass. Hurricane Shutters Florida is one of many companies specializing in storm protection for private homes and businesses.

Pros and cons of Bahama shutters

If you’re undecided whether Bahama shutters are the right solution for your windows, we’ve gathered the most important pros and cons in the list below.

What materials are Bahama shutters made of?

Bahama shutters can be made of the following materials:

People who are more concerned over the aesthetics of a house’s exterior often choose wood because of the natural decorative beauty wooden shutters have.

People who are looking for something that will last longer and provide more protection prefer Bahama shutters made of aluminum or steel.

Bahama shutters made of vinyl or fiberglass are a viable option as well, but most people prefer wood or metal for aesthetic reasons.

How much do Bahama shutters cost?

On average, Bahama shutters cost between $40 to $50 per square foot. The price depends on your requirements, and it may fluctuate if you want a hurricane-proof solution.

The easiest way to get a quote is to fill a form online from your desired dealer, or you could request a quote from your preferred local dealer. More often than not, your local dealer may be able to give you a better price than what you can find online.

Bahama shutters also go by other names, and sometimes there’s a bit of a confusion because of that. While people could be referring to Bahama shutters, the name doesn’t always indicate that. Bahama shutters often go by the following alternate names:

Historically, Bahama shutters have been known to provide protection against hurricanes and other extreme weather conditions. These days, however, Bahama shutters can be so much more. Not only are they durable, but they can also be decorative.

How to make your own Bahama shutters?

We also found this YouTube tutorial to be especially helpful:

What are some of the most popular Bahama shutter manufacturers?

If you’re looking to buy Bahama shutters, you may want to check with a few of the following manufacturers:

A thing worth looking for, is the best warranty and track record provided by the company. Look for customer reviews online, and see what people are saying about the provider/manufacturer you’ve selected.

Why are Bahama shutters so expensive?

Bahama shutters that are made of wood are manufactured from high-grade lumber and made with a great deal of care. More often than not, they’re even made in the US, which of course drives the price up a notch in comparison to cheaply made products from abroad.

The design and selection of materials has to be on point, otherwise they may not live up to the building code and/or quality standards. Real hurricane shutters are expected to protect against strong winds and heavy downpour, hence the construction must be sturdy.

While Bahama shutters are indeed expensive, we believe they’re worth every penny due to the protection they provide.

Because of their horizontal slats, Bahama shutters limit the sunlight from entering a room. While some homeowners don’t like this, others see this as a plus because it makes the room cooler and protects their furniture and other precious items from fading due to the lack of direct sunlight.

Not only is this a plus due to the shutters protecting the interior against direct sunlight, they also save energy as you won’t have to run the air conditioner all the time.

Bahama shutters do provide a good amount of privacy to your house. The angled slabs are positioned in a way that nobody can look directly into your house from outside, which means that you don’t need curtains at all.

Some Bahama shutters may only provide partial privacy though, so if privacy is a big issue you’ll have to inspect the shutters closely before choosing the ones for your house.

What do Bahama shutters look like from the inside?

How your Bahama shutters look from the inside depends on whether they are fully open, fully closed, or partially open. If they are fully open, you will be able to see everything without much of your view being obstructed. If you want to limit the sunlight entering your home from the window and decide to close it partially, you will see a part of the shutter.

Can you see through Bahama shutters?

Some Bahama shutters give you a partial outlook, while still obstructing the view for people passing by on the street. You may not be able to see much through your Bahama shutters, unless they can opened high enough to not obstruct your view at all.

Technically, Bahama shutters are not meant to provide privacy, yet they do so because of their protective design.

Can Bahama shutters be closed from the inside?

You can close the Bahama shutters from both the inside and the outside. No matter how you close them, you will need to remove the rod that holds them up and pull (or push if you are on the outside) the shutter and secure it firmly by locking it.

Important note: In some cases, such as with Windward Shutters, hurricane- or storm-rated Bahama shutters must be secured from the outside because there are anchor systems attached to the shutter and structure. This so your shutters won’t flap or even become unhinged in really bad weather.

Can you get Bahama shutters for arched windows?

If you live in a house with arched windows, and you’re really interested in Bahama shutters but aren’t sure if they work with arched windows, some people have found a way to work around it while keeping the exterior of your home aesthetically pleasing. The arched top of your window can have a fixed shutter installed which then connects to a regular square or rectangular shutter that opens and closes just like regular Bahama shutters do.

As always, Pinterest is a great source of inspiration. Check out some of these pins to get an idea of hos Bahama shutters for arched windows look:

Looking for alternatives to Bahama shutters? You can check out the following:

The shutters mentioned above provide both decorative and protective features to your house, so make sure you check them all before making your final decision.