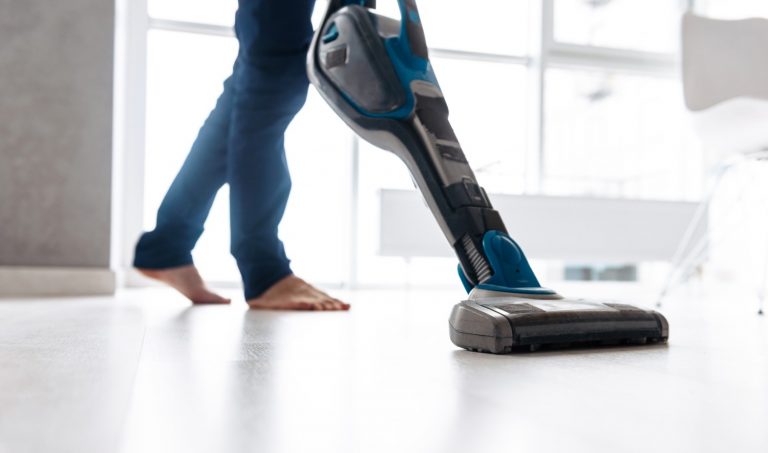 In this side-by-side comparison we put stick vacuums up against upright vacuums to get a better understanding of their respective advantages and disadvantages.

While upright vacuums are still the mest popular choice for most people, the stick vacuums are starting to catch up with many new models being released the past few years.

There’s a race going on, and stick vacuums definitely have a lot of advantages over the old-fashioned upright vacuums – but which one gets to the finish line first?

A glimpse at the contestants

Before we get to the actual side-by-side comparison, see the definition of stick vacuums and upright vacuums below:

Stick vacuums are small and lightweight, consisting of a vacuum head, a metal wand, and a handle with a motor and small dust bin.

They are generally used for small tasks, but newer models have gotten better and better.

You can usually get a wall mount for your stick vacuum, making it easy to pick up and get started.

Upright vacuum cleaners are generally a bit larger, but also very effective on most types of flooring.

They usually feature a platform with a rotating brush underneath, and a dust bin with a motor on top of it.

Upright vacuums are usually able to stand on their own, making them easy to grab and use.

For this side-by-side comparison, we took these factors into consideration:

The suction, often measured in kPa (kilopascal), defines how easily the vacuum picks up dust and debris from various surfaces.

Most stick vacuums and upright vacuums make partial use of suction as well as agitation, in order to pick up as much as possible from both carpeted and hard surfaces.

Stick vacuums, most often being battery driven, have the weakest suction in comparison with upright vacuums. According to Consumer Reports, they’re mainly suitable for lighter tasks, and we do agree on that one.

They do often have a brush attached as well though, in order to agitate the surfaces and collect more dust where it is being used.

At the time of writing, Dyson V11 Torque Drive is the most powerful stick vacuum, and according to Wired it has up to 20 percent more suction power than its predecessor.

Clearly, most upright vacuums have the upper hand when it comes to suction. They are often bigger than stick vacuums and corded, which in combination grant them the ability to generate a more powerful suction.

Some upright vacuums have a brush attach as well, so in general the suction wins against stick vacuums.

Shark Navigator ZU561 could easily be one of the better options, if you’re in the market for an upright vacuum cleaner with powerful suction.

The upright vacuum, no question. The suction is of course stronger than the smaller, battery-driven stick vacuums.

Most people want a vacuum cleaner, that quickly picks up dust and debris without too much hassle.

They don’t want a vacuum cleaner that takes forever to plug in, turn on, and handle on a daily basis.

Stick vacuums are incredible effective. Most of them are battery driven, granting them a large advantage over upright vacuums, because they’re always at hand and ready to use within seconds.

However, in bigger homes they aren’t as effective, because the vacuum head tends to be smaller and you might have to go over the same spot more than once in order to pick up all the dust and debris.

Upright vacuum cleaners are quite effective when used on larger areas, due to their head often being wider than stick vacuums, and the amount of suction they’re able to generate from the bigger motor.

Most of them are corded, so you’ll have to deduct the time it takes to untangle the cord, plug it in, and rewind the cord properly.

Most people want a vacuum that isn’t too heavy, but at the same time they want ones with a decent capacity.

The capacity has an impact on how often you need to empty the dirt bin, so for larger homes with pets you’d want a vacuum with a higher capacity.

Stick vacuums generally have a low capacity, spanding between .5 gallons up to 1 gallon.

This will usually suffice for smaller homes, but for a large house and pets you might want to go with a higher capacity.

Upright vacuums usually have plenty of capacity for most needs, with a dirt bin ranging between 1 and 2 gallons.

These are usually the safest bet for those who vacuum often and have pets.

When it comes to capacity, upright vacuums take the lead. In general, their dirt bins are twice or even thrice as large as the ones in stick vacuums.

Dust is everywhere, and you’d probably want to use your vacuum to remove dust from any surfaces, not just the floors.

Most vacuum cleaners come with additional attachments and accessories, enabling you to vacuum stairs, blinds, lamps, shelves, and more.

Stick vacuums usually come with a detachable wand and several attachments as well as accessories, enabling them to be used for many different purposes.

Some stick vacuums, especially the ones from Dyson, have a large range of additional attachments available for purchase.

When it comes to versatility, a stick vacuum like the Tineco Pure ONE S12 comes with an extensive accessory pack as well as a spare battery. And according to Trusted Reviews, it is quite good as well.

Most upright vacuums are made solely for use on floors, but some have a detachable hose as well as a wand you can use to reach blinds, ceilings, and even detach the canister for vacuuming of stairs and more.

In general they don’t have a large range of additional accessories available for purchase, though.

When it comes to versatility, Shark Navigator Lift-Away Professional is a great choice. The canister is detachable, and you can therefore bring it along with you as you vacuum the stairs and other narrow places.

When it comes to versatility, nothing beats the stick vacuums and the large range of additional accessories available for purchase.

Most people don’t want vacuuming to be a tedious task, and in a busy household you’d want the easiest vacuum that won’t put a strain on you as you use it.

With the battery powered models it’s as simple as grab and go. Most models come with a wall mount or can be easily stored on a shelf, ready for use whenever needed. There’s no need to plug them in, simply grab it and turn it on by a press of a button.

Collected dust is easily ejected as well, without causing a mess.

If you want a stick vacuum that’s easy to use, the Dyson V8 Absolute is one of the best choices. It has a dust bin that ejects its contents through the bottom without you having to touch any of it, and all accessories snap together easily.

Most upright vacuums are corded, and only a limited number of models have retractable cords – that means you’ll have to manually unwind and retract the cord every time you want to vacuum your floors, making it a bad choice for small homes.

If you can live without most of the bells and whistles, the Bissell Featherweight 2033 upright vacuum is a solid choice for simplicity and practicality.

Stick vacuums. It doesn’t get much easier than with a battery powered, handy vacuum, that you can easily grab and use right away.

When it comes to price, you definitely don’t want to go too cheap if you expect a functional, effective vacuum cleaner.

There’s no need to get the most expensive model either, though.

Stick vacuums are generally quite expensive, especially if you want one from a well renowned brand such as Dyson, Sharp, and more.

There are some cheap models available though, but the build quality of those is a hit or miss.

Upright vacuums can be quite cheap yet still efficient, but there are also some very expensive models on the market as well.

Upright vacuums are generally cheaper, because you don’t need to invest in expensive batteries to make it run.

In the stick vacuums vs. upright vacuums questions, there’s no clear winner.

Both types of vacuums are great, but for different purposes.

Stick vacuums are compact, lightweight, and extremely easy to use. They often come with a large accessory pack, enabling you to carry out many different cleaning tasks.

Perfect for any small house, studio apartment, a small second floor, or an RV.

Upright vacuums are generally powerful with a high capacity, making them the perfect choice for a larger home with different flooring types.