Skip to content
Our team independently selects, reviews, and identifies the best products. We may earn affiliate commissions on purchases made from links on this page. Learn more. This post was updated on March 21, 2021 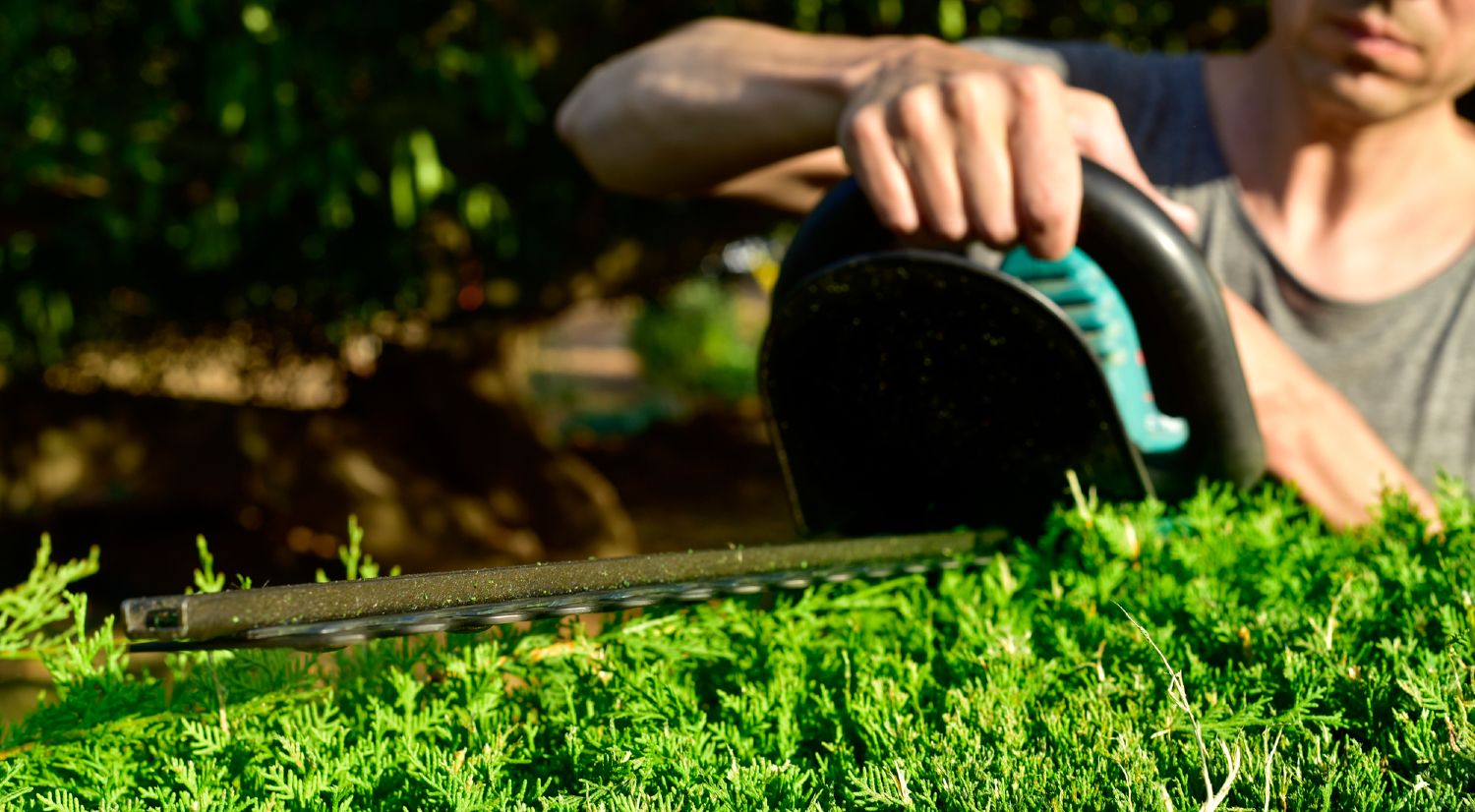 Hedge trimmers are widely used to maintain hedges and create uniform horizontal and vertical lines, and they’re especially useful when cutting back thick branches. You’ll easily get a whole day’s workout after trimming just a few feet manually, but the hedge trimmer cuts the entire hedge in a matter of hours.

It goes without saying that you need a powerful hedge trimmer when you’re dealing with thick branches, and you’ll have to be careful not to overwork the motor.

For this buying guide we’ve reviewed some of the best options currently on the market.

The Husqvarna 122HD60 is a powerful, gas powered hedge trimmer. It is capable of cutting twigs and shrubs up to 4/5 inches thick, and has plenty of power for the entire day.

The Husqvarna 122HD60 is probably one of the best gas powered hedge trimmers suitable for thick branches. It has a very powerful engine that enables you to trim branches with a thickness of up to 4/5 inches, which is more than enough for most people. It gets most jobs done quicker than most hedge trimmers as well, which results in less time spent on pruning and trimming the hedge.

The single greatest thing about gas powered hedge trimmers, besides how powerful they are, is the fact that they can go on for the entire day. You don’t have to lay out a long extension cord, nor do you have to recharge multiple batteries.

Unfortunately, such benefits come with a hefty price tag and a noise level higher than electric hedge trimmers. The weight may also cause stress on your back and arms, especially if you’re trimming a tall hedge. It’s heavier than electric models, which is normal, but definitely worth considering. 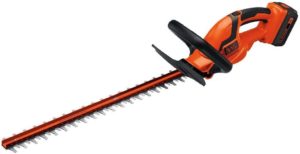 This cordless hedge trimmer is surprisingly powerful, and cuts through 3/4-inch branches with no issues. A great choice for those seeking a portable, lightweight hedge trimmer.

For most ordinary gardens, the BLACK+DECKER LHT2436 hedge trimmer has more than enough power to cut through branches, twigs, and shrubs of any hedge. And according to BLACK+DECKER, it covers up to 6000 square feet on a single charge. Another advantage is the quick charger, which takes only one hour to recharge the battery.

With a weight of only 6.9 pounds, it’s lighter than most gas powered hedge trimmers, but of course this is at the cost of the cutting capabilities. For most people, the power is sufficient and it performs quite well with thick branches up to 3/4 inches.

If you’re in the market for a portable hedge trimmer with plenty of power and a reasonable price tag, the BLACK+DECKER LHT2436 is worth considering. 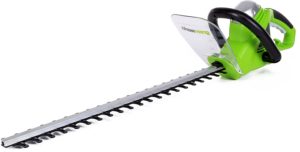 If you’re looking for a powerful corded hedge trimmer for thick branches, the Greenworks 2200102 is a solid option.

We were quite surprised to find that it performs very well, however the build quality is a bit disappointing. We don’t think it will last as long as more expensive models, and it’s probably most suitable for small trimming tasks.

If you don’t have a proper extension cord, this needs to be factored into the total cost – and it may actually end up costing as much as the hedge trimmer itself!

With the ability to cut through branches with a thickness of up to 1 inch, the Poulan Pro PR2322 packs enough power to handle most hedges and bushes.

Although it only costs a fraction of other gas powered hedge trimmers, the Poulan Pro PR2322 is capable of cutting through thick branches of up to one inch in diameter. This is better than other hedge trimmer, although the price is actually fairly reasonable.

It is said to work very well for many varieties of hedges and bushes, which is great news for those with a lot of different plants in their gardens.

The grip is comfortable with a swiveling handle, which makes it capable of trimming hedges and bushes in different angles without causing too much stress on your back and arms. It may not be as easy to start as other gas powered hedge trimmers, and a few users claim that there’s a steeper learning curve involved than with other similar models.

Best features to look for in hedge trimmers for thick branches

If you’re shopping specifically for a hedge trimmer capable of cutting thick branches, you may want to consider the factors mentioned below.

Hedge trimmers can either be gas powered, battery powered, or by a regular cord connected to an outlet.

Gas – the most powerful option and the common choice of professionals, the gas powered hedge trimmers are the most capable when it comes to cutting and trimming of greenery in general. Gas powered engines are more noisy than electric engines though, which is worth considering if you don’t want to bother your neighbors while trimming your hedge.

Battery – battery powered hedge trimmers are getting more and more popular, and they’re particularly suitable for small gardens. They’re as portable as gas powered trimmers but lighter, which increases the comfort level significantly.

Electric cord – the cheapest hedge trimmers are powered by electricity, and require access to a power outlet nearby. They’re not the most practical option for obvious reasons, but they’re powerful and generally quite reliable.

The tooth gap defines the space between each of the cutting blades, and are called as such because they look like actual teeth. Some hedge trimmers are capable of cutting very thick branches due to a large tooth gap, which in some models are up to 1 inch or more.

Weight is a very important factor to consider, especially if you’re spending a lot of time perfecting the look of your hedge and bushes. A lighter hedge trimmer will cause less stress on your back and arms during use, whereas a heavy hedge trimmer may cause a sore back or arms.

Hedge trimmers are equipped with a cutting blade, which is usually between 22 and 26 inches for home use. The cut length defines how many times you need to go back and forth over your hedge, but a longer cut length will also add to the total weight and make the trimmer heavier than models with a shorter blade.

Some hedge trimmers can be mounted to an extension pole, which makes them capable of reaching areas that would otherwise be out of reach without a ladder.

What this means, is that you won’t have to walk around with a ladder and climb up and down stairs to reach the top of your hedge or bushes. A great plus for a lush garden, where plants are allowed to grow big and free.

Ergonomics are an important factor to consider as well. However, it can be difficult to assess whether a hedge trimmer is comfortable or not unless you actually hold it in your hands. If ergonomics are a big concern of yours, we recommend that you visit the local hardware store to get an idea of what you need and what you like.

Ideally, you would want a soft, rubberized handle that swivels and adjusts to the angle you’re working in. You’d also want a power button that doesn’t put too much pressure on your fingers.

What is the maximum thickness of branches that most hedge trimmers cut?

Unless you’re willing to spend extra money to get professional, heavy-duty equipment, the hedge trimmers are generally capable of cutting branches with a thickness of up to 3/4 inches.

Some hedge trimmers are capable of cutting branches with a thickness of up to one inch or more, but these are usually gas powered and unnecessary for most normal gardens.

If you’re looking for a tool capable of cutting a large amount of thick branches, we recommend that you look for a lopper. It does require a bit more manual labor, but at least you won’t run the risk of ruining or overworking your brand new hedge trimmer.

If you have a lot of branches that are just below one inch or even thicker, an electric lopper (or even a hand saw) could also be worth considering. It all depends on how much manual work you’re willing to do.