Skip to content
Our team independently selects, reviews, and identifies the best products. We may earn affiliate commissions on purchases made from links on this page. Learn more. This post was updated on December 9, 2020 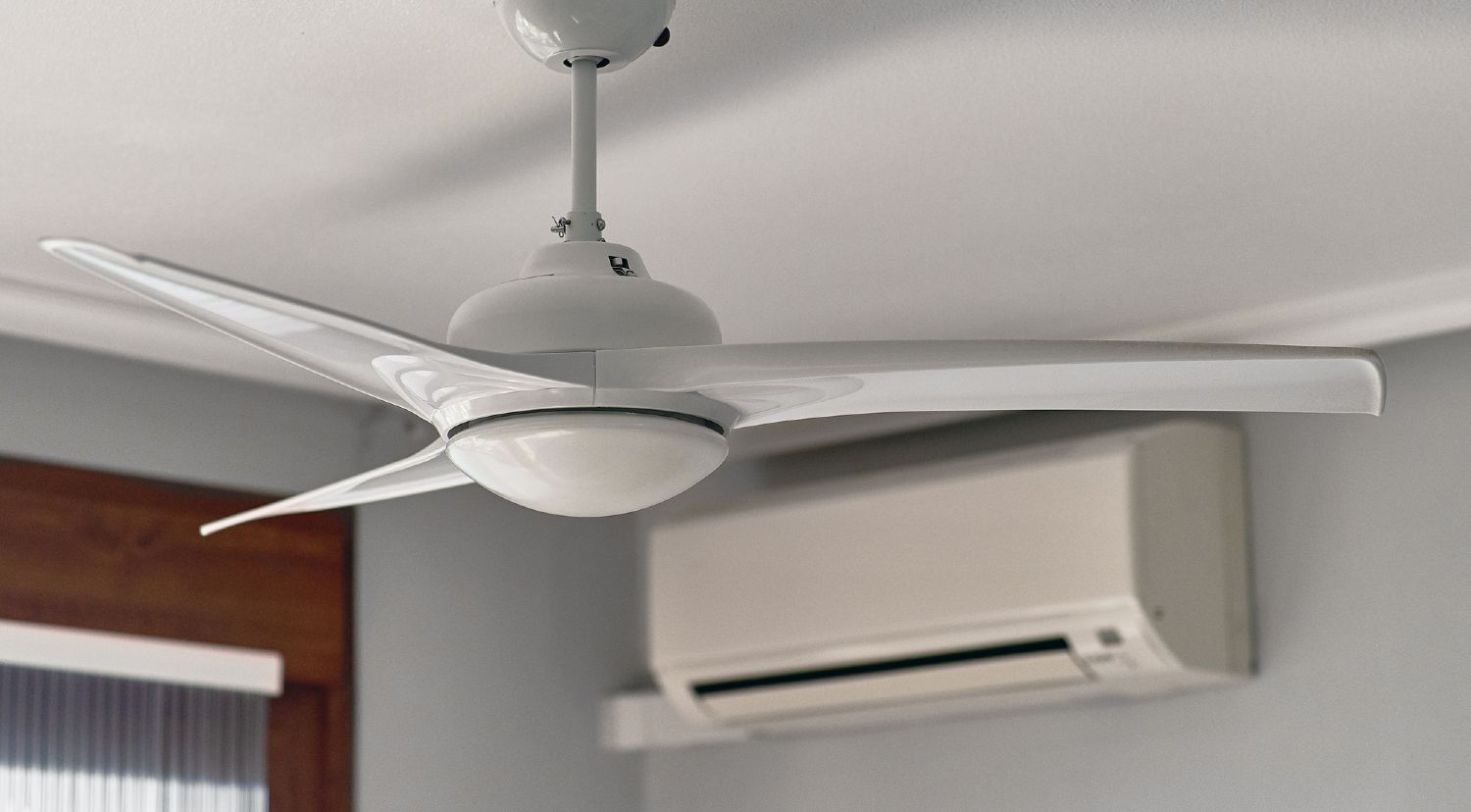 Changing the direction of your ceiling fan has great impact on its performance during the summer and winter, as it will work in different ways to improve the indoor climate. During the hottest months of summer a refreshing breeze is preferred, and during the winter you’d want to properly circulate the warm air. This is achievable by reversing the motor, in order to create the desired effect.

In the summer, ceiling fans create a wind-chill effect due to the cooling breeze passing by you. This allows heat to transfer from your body faster, and according to Energy Star most people report they can adjust their thermostat a few degrees higher when using their ceiling fan. This is a great win for your electricity bill, the environment, and your HVAC system which could last longer between repairs and maintenance.

In the winter, with your ceiling fan adjusted and rotating at low speed in the opposite direction, it allows you to draw cool air up towards the ceiling while pushing the hot air downwards. Because hot air always travels upwards, there’s actually a decent chance that your ceilings are a few degrees warmer than your floors. This means that you can adjust your thermostat a few degrees lower than usual while running your ceiling fan, simply because your ceiling fan moves warm air to where you are in the room.

Running your ceiling fan in a clockwise vs. counterclockwise direction makes a big impact on your electricity bill and your overall level of comfort inside your house. It will either create a wind-chill effect during the summer or move the hot air downwards during the winter, keeping you comfortable throughout the year while reducing the workload on your HVAC system.

According to Energy Star, running your ceiling fan in the counterclockwise direction is recommended for creating a pleasant breeze. You can control this yourself by standing directly under the ceiling fan; If it’s set properly, you should feel a cooling breeze from above. In this setting your ceiling fan creates a downward current of air, which will then move across your floors and provide a much needed wind-chill effect on a hot summer day.

Ceiling fans are very effective during the hot summer months, and most people are able to adjust their thermostats to a higher setting. According to a recent August 2020-study published by the Florida Solar Energy Center, people will tolerate a higher thermostat setting if provided a breeze from a ceiling fan or similar. The study also found that for every degree the thermostat setting is increased, you’re looking at a 10-15% decrease in cooling energy use.

With your ceiling fan running in the right direction during the summer, you’re not only able to feel more comfortable during the hottest days of the year, but you’ll also save money on your electricity bill.

This may come as a surprise to some people, but running the ceiling fan at a low speed setting in a clockwise direction could actually help distribute the hot air trapped near the ceiling for a better and more energy efficient heating of your entire house.

As you may know, hot air tends to rise and get trapped near your ceilings. For a more scientific answer as to why hot air usually rises, Dr. Christopher S. Baird explains three main ways for heat to travel in this article.

Knowing that hot air often rises and traps near your ceilings is important when operating a ceiling fan in your house. If your ceiling fan doesn’t run in the right direction, hot air isn’t properly circulated throughout the room.

When your ceiling fan is set to run in a clockwise direction, it creates an updraft that will pull cold air from the middle of the room and push hot air towards the walls and downwards. This allows you to better utilize the heat produced by a HVAC system, and in most cases you could adjust the thermostat a few degrees without feeling any difference.

For a vaulted or high ceiling you would need to mount your ceiling fans with a downrod in order for them to be in the proper height of 8 to 9 feet from the floor. According to the Energy Star recommendations, this is the desired height if you want to make the most of your newly purchased ceiling fans.

Ceiling fans should still have the direction changed between seasons, even if your air conditioning vents are located in the ceiling.

The direction of your ceiling fan helps pick up either the hot or cold air and distribute it accordingly, making the cooling or heating of any room more efficient than if it was just the air conditioner on its own.

By setting your ceiling fan in the clockwise direction it still picks up the air from ceiling vents and circulate it throughout the room, but you won’t feel the breeze while standing or sitting directly under the fan.

How to check which direction your ceiling fan is moving

If you want to check which direction your ceiling fan is moving, we recommend that you do the following.

How to change ceiling fan direction with no switch

If you can’t find a switch for changing your ceiling fan direction, you’re left with a few alternative options that you could try out.

It’s important to understand the different between cooling people vs. cooling rooms. An HVAC system cools/heats the room by replacing the air, while a ceiling fan circulates the same air. An HVAC system along with ceiling fans are therefore a great combo, as they “complete” each other by mainting a movement of air throughout the entire room.

Because the effects of a ceiling fan are felt almost instantly, there’s no need to keep it running if a room is unoccupied. Turn it off once you exit the room, and turn it back on upon entering the room for minimum electricity consumption.

During the winter you could potentially benefit from running your ceiling fans on a low setting though in the clockwise direction though, as they will create an updraft which will push the hot air out to the sides and down your walls for better utilization of your heater. This will improve the efficacy of your heater, since the hot air keeps getting recirculated throughout the house. Of course this is also particularly recommended for occupied rooms, especially living rooms and bedrooms where people usually spend most of their time.

How much electricity does a ceiling fan use?

Several factors determine the electricity consumption of your ceiling fan. Whether you run it at a high setting or a low setting makes a big difference, but proper mounting and balancing plays a role too. Switching your fan to run either clockwise or counterclockwise makes a difference too, especially when it comes to the efficacy of cooling you down and/or circulate the air in a particular room.

For a properly installed and balanced ceiling fan, it is expected to run at 30-50 watts per hour. Some fans have an even lower electricity consumption though, with the “Most Efficient”-rated fans using as little as a few watts per hour on their lowest setting.

If you’re shopping for a new ceiling fan, use the EnergyGuide Label to get an idea of the annual running cost.

Below are a few examples of how much electricity some of the current most popular models consume.