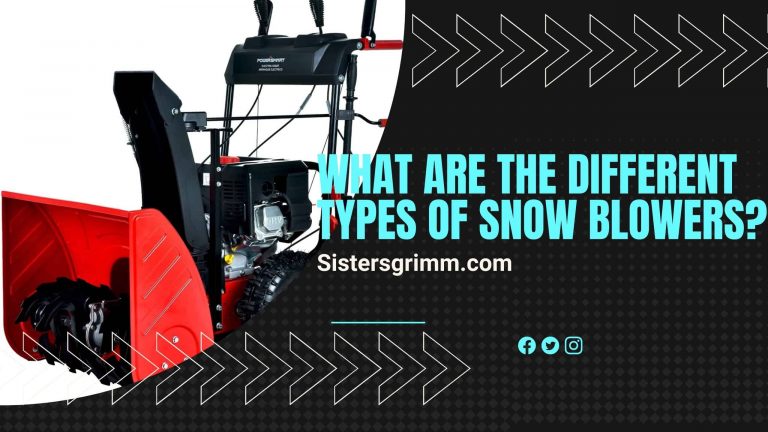 Are you planning to transition from a manual snow shovel to a snow blower but not sure what type to choose?

Snow blowers are the best alternatives to snow shovels because they facilitate quick removal of snow from pathways, driveways, front walks, decks, and patios.

Even if you don’t live in a region subject to arctic weather and heavy snowfall, you’ll find these tools quite effective in helping you deal with snow.

Learning about the different types of snow blowers will make it easy for you to choose the right kind of equipment that fits your clearing job.

Quite too often, the type of blower that you choose will depend on the depth of snow you wish to clear, the expected throw distance, the power of the device, and the price.

What are the Different Types of Snow Blowers?

The following are the different types of snow blowers in the market right now.

A single-stage snow blower uses a corkscrew auger to break up, lift, and toss snow to the side. These machines don’t self-propel, you have to push them forward yourself.

Their working width ranges between 10 and 24 inches, so they can cover a substantial area when blowing snow.

Because they’re compact and lightweight, single-speed snow blowers are the best deal for those who want to remove snow from tight areas such as patio and small decks.

They have a lower height, which means they can handle snow that’s 8 to 10 inches deep at a time.

Keep in mind that a single-stage snow blower is best used in an area with light to moderate snow. It does remove a large quantity of light, dry snow just fine, but it’s not heavy-duty enough to manage heavy, wet snow.

The rubber-tipped auger of this unit can come into contact with any surface. And given that it moves at a high speed, you shouldn’t use the machine on surfaces with gravel or you might destroy the pathway.

If you need a snow blower that’s bigger and more powerful, go for a two-stage model. Like the one-stage blower, this one also features a corkscrew auger that scoops snow and throws it to the side.

Manufacturers take the design a step further by adding an impeller, making it possible for the machines to blow snow from a wider path with more power.

Thanks to the impeller, more snow pass through the blower, launch through air, and dispatches even farther away.

Given their self-propelled mechanism, two-stage blowers allow you to wade through an insanely longer stretch of snow without using too much elbow grease.

One of the things we truly love about a two-stage snow blower is that its auger doesn’t touch the ground. That’s you can use it even on gravel path.

What’s more? They can blow a huge amount of snow from the driveway, pavements, and pathways, not to mention it can scoop wet, heavy snow.

How to start an electric snow blower

A three-stage snow blower collects snow and ice, chops them, and then throws them away a distance farther than what a one-stage model can reach.

From a construction and performance point of view, a three-stage blower is stronger model, which is why it’s the best option to consider if you want to blow thick, heavy, wet snow.

While it’s a higher-end model, a three-stage snow blower can blow snow as thick as 20 inches.

That holds whether the snow is light, heavy, or wet. If you live in an area subject to artic weather and extremely heavy snowfall, you will get more value from the three-stage snow blower.

Available in single, two, and three-stage models, gas-powered snow blowers are far much better than the electric models. They may be expensive, heavier, and somewhat costly to maintain.

But if you’re looking for heavy-duty blowers, the kinds often used in commercial applications, you should look into gas-powered snow blowers.

People who live in areas subject to light as well as heavy snowfalls swear by gas-powered blowers, mostly because they have a higher endurance and can blow twice as much snow as what electric models blow.

With their strong auger, gas-powered snow blowers pick up to 20-inch deep snow and easily toss the content to the side.

If you just want to clear snow from small-to-medium sized driveways, patios, small decks, and walkways, you should invest in an electric snow blower. An electric snow blower is not only quite during operation, but it’s also eco-friendly and requires little maintenance.

Keep in mind that an electric snow blower, be it a one or two-stage, isn’t as powerful as a gas-powered model. They can work on snow not more than a foot deep, which is 50% less what a gas snow blower can manage.

So if you’re only going to use them in small space subject to minimal snowfall, they should suffice.

What’s the difference between 1-stage and 2-stage snow blower?

In a one-stage snow blower, the auger pulls and discharges the snow. There’s a rubber material on the auger to keep it from direct contact with the ground.

A two-stage model works in a similar way to the one-stage blower, with an addition of an impeller to increase the snow blowing speed. Also, the auger doesn’t touch the ground.

Which snow blower is better gas or electric?

A gas-powered snow blower is more effective than an electric model. They can blow twice as much snow what an electric model blows, not to mention that they’re ideal for heavy, wet snow. However, they’re expensive, less eco-friendly, and require more maintenance.

How long do snow blowers last?

A snow blower can last at least 10 years with proper care and maintenance, regardless of the buying price. Many tend to last 20 to 30 years, which means it’s more of a one-time purchase with long-term snow blowing benefits.

We hope that with this information, you’ll be able to choose the right kind of snow blower to use when the season to put one to work comes.