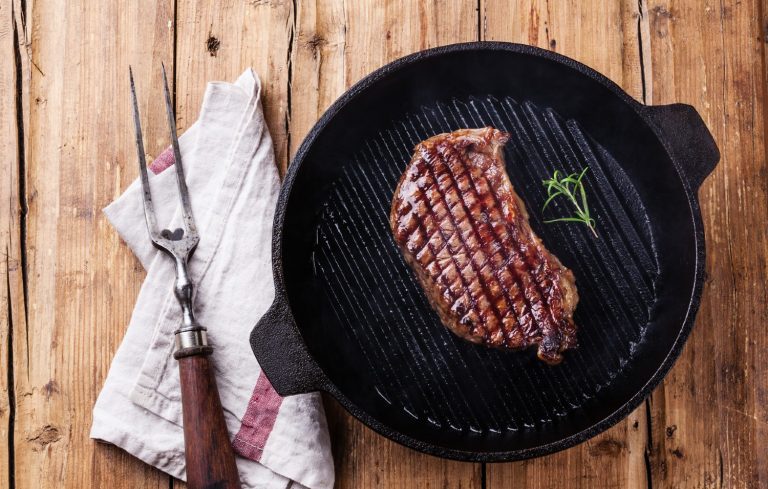 I’ve always been a fan of skillets coated with a non-stick layer, because of how easy they are to use and clean. However, these aren’t really great at cooking steaks and other types of meat, and if you’ve tried it, you know exactly what I’m talking about.

There’s nothing worse than firing up your cooktop, adding a bit of oil to your skillet, and then seeing the steak BOILING because the skillet doesn’t retain enough heat to make it sear.

Then I got my eyes on a cast iron skillet. At first I thought “gosh that’s heavy, I’ll get myself a workout each time I cook a steak with this thing!”, but then I started researching and understanding how and why it works so well.

The cast iron is HEAVY, that’s for sure, but that’s actually the sole reason why it makes such a wonderful crust on anything you cook in it.

Once it’s warmed up to the desired temperature and you add the steak (or other meats) you want to cook, it keeps warm for a VERY long time.

The steak won’t cool it down to the point where it just starts boiling – instead it will get beautiful sear marks in no time.

Are you in the market for the best cast iron skillet for steaks and meat? Well, I’ve done my fair share of research, and here’s what I came up with. Make sure you read to the end, because you don’t only need the best skillet – you also need to know how to take care of it. I’ll walk you through it all in this buying guide.

So, basically there’s two types of cast iron skillets, and you want to know the differences before choosing.

The regular cast iron skillet has a flat surface, that works well for both steaks, meats, vegetables and all other things. It cooks all foods evenly, and gives it a beautiful crust all over. Most people prefer this type of cast iron skillet for their steaks, because it’s super easy to use and gets very hot.

Some cast iron skillets have grill ribs, and basically they work like your outdoor cast iron grill grates. Your meats get those eye-catching grill marks, but there’s a catch: Because the grill ribs elevate the meat slightly, the grease and juices run off and starts smoking or steaming. It will generate a bit more smoke or steam than a regular cast iron skillet, hence it’s recommended to use it outside if possible.

Which Cast Iron Skillet for Steaks? Here’s Our Top Picks

I remember the first time I came across this Lodge cast iron skillet, back in the days when I was tired of having my steaks ruined by a mediocre non-stick skillet. I could barely lift it off the store shelf, and I respectfully placed it in the bottom of my shopping cart.

Till this day it keeps working wonders in my kitchen, and you can barely tell it’s been used for nearly a decade already! That’s how sturdy and durable it is.

It gets extremely hot and keeps hot, even when you place a thick cut of meat and cook it for a longer period of time. It works very well for searing off your steaks, but it can basically do anything your regular pans do. I’ve used it for anything from scrambling eggs to marinara sauce, all it requires is a proper seasoning from time to time – I’ll get into that at the bottom of this article.

All in all, this is by far the best option for those wanting a proper cast iron skillet for steaks and other meats!

THIS is what you need if you want year-round grilling right in your kitchen! Yes, it will generate a bit more smoke than a regular flat-bottomed cast iron skillet, but in return you get beautiful sear marks.

Be aware that not all grill skillets are able to produce such sear marks, just because they have grill ribs. The grill ribs have to be of a certain shape and height, because you need to maintain a space between the grease dripping off the steak and the actual ribs – otherwise it may not get even sear marks.

This cast iron skillet is perfect for steaks, because it has nice big grill ribs that’ll surely produce nice sear marks on all types of steaks and meats – heck, it will even leave beautiful sear marks on veggies like asparagus, green beans, and more.

As with other Lodge skillets, it is made in the USA and will last you a lifetime with proper care.

Seasoning of Your Cast Iron Skillet: What Does It Mean?

While the term “seasoning” usually means adding flavor to your food, this is NOT the case when seasoning a cast iron skillet.

Seasoning is the process of coating your cast iron skillet, and you have to do it regularly to maintain a proper non-stick surface, but also to prevent it from rusting.

If you want to learn how to properly season your cast iron skillet and prepare it for your first steak, here’s a useful video to help you get started: