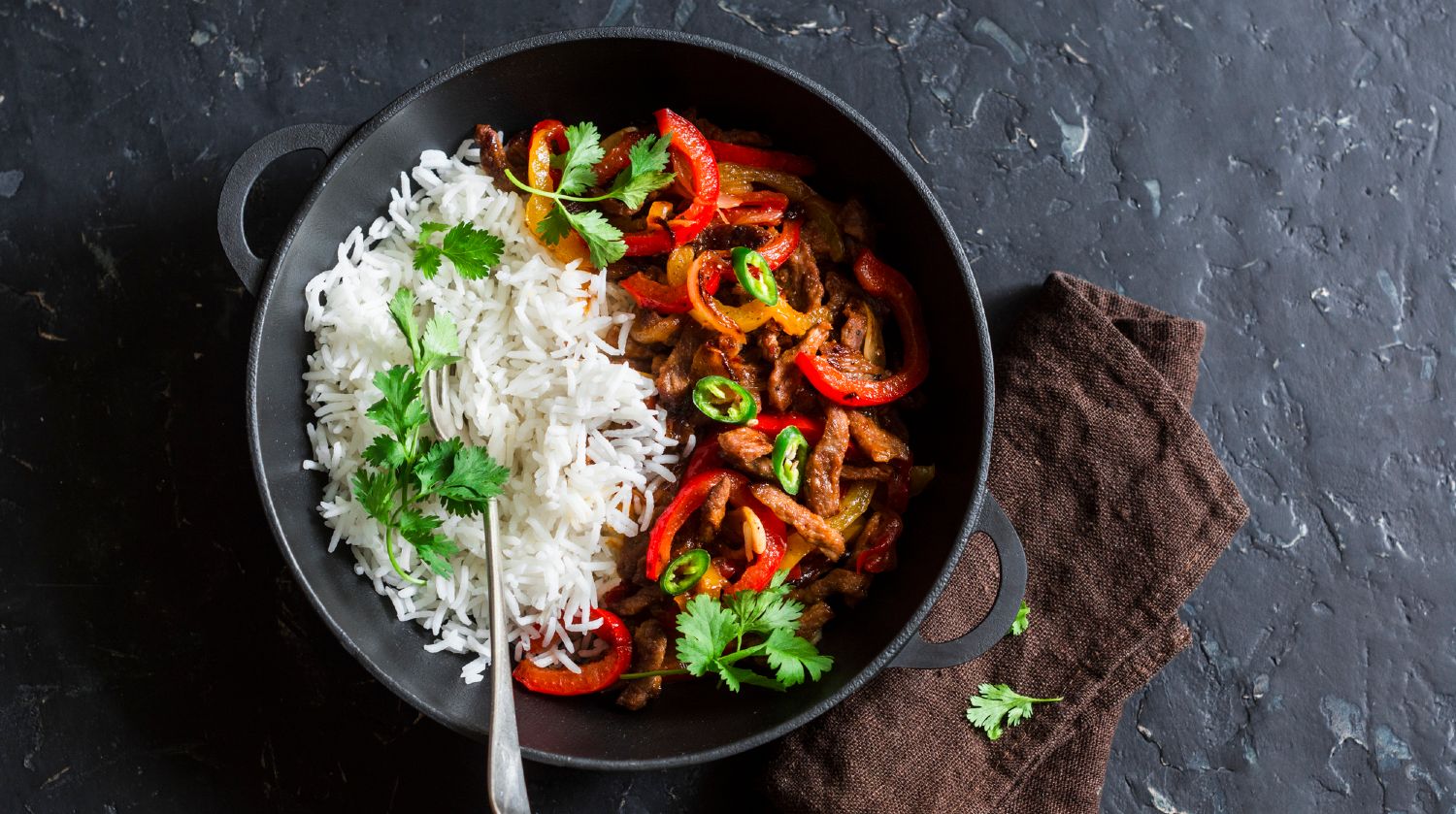 Recently, I’ve discovered and fallen in love with the art of cooking. For me, there’s something relaxing about cutting up vegetables and sauteing garlic and onions. Cooking unleashes my zen. Plus, there are so many recipes to discover and try out. I’ve done some meals with chicken and vegetables and some dishes that go well with rice. One of my favorites, however, is a crispy fried noodle dish that I cook in a wok.

If you’re not so familiar with a wok, it’s a round-bottomed, high-walled pan that originated in the Chinese Han dynasty. A lot of Asian restaurants use it and you will be sure to find it in a lot of Asian homes too (make sure you also check out the best cast iron woks from our curated list, if you’re in the market for one yourself).

Before you think that the wok is another pan to add to your list of frying pans, there is so much more that can be done with a wok than just stir-frying. You can steam, stew, as well as boil in a wok. Fuchsia Dunlop, the author of several books about Chinese cooking, says that the wok is the main cooking pot of the Chinese kitchen, and as there are several different types of dishes on the table at one time, most of them will be done in a wok.

If it’s your first time you’re getting a wok and try cooking with it, here are nine amazing dishes you can cook in a cast iron wok:

Asians love their rice and eat it for almost every meal. Fried rice, however, was a rare treat for us while we were growing up, especially rice cooked in yang chow style. Yang chow fried rice was invented during the Qing Dynasty (sometime during the eighteenth century) and is a dish that they served during special occasions. It is made of rice mixed with egg, pork, chicken, beef, and several kinds of vegetables.

Well-experienced chefs also make it a point to flip the rice to ensure that the dish is browned but not burned. Think of flipping a pancake, although flipping fried rice can be a bigger challenge with all the loose ingredients and the fact that the wok weighs a lot more than your regular frying pan. (In fact, the act of flipping rice in a wok was so fascinating that two students, Huntang Ko and David L. Hu, decided to turn it into their research article entitled “The physics of tossing fried rice”.)

When you make fried rice (whether regular with just oil and some spices or something a bit more complex like yang chow), you don’t necessarily need to flip it as the professional chefs do. One of the benefits of cooking in a wok is that the sloped sides make it easy to mix ingredients around. The wok also ensures that the ingredients heat well and evenly, so you have a lot of space to mix in your vegetables and meat until your fried rice is cooked just the way you want it.

There are countless recipes for noodles with origins from various cuisines—Chinese, Japanese, Korea, and more. Some noodles require you to steam or boil the noodles first before mixing them with other ingredients (vegetables and meat). With other noodle recipes, you have to stir fry the noodles and then pour the sauce over them (such as for crispy fried noodles). And for others, the noodles are cooked in the broth you are making.

The good news is, whichever noodle dish you decide to cook at the moment, all these can be done in your cast iron wok. The wok is not just your go-to piece of kitchen equipment when you want to stir fry something, but you can use it for boiling things as well.

Cooking noodles in a wok is also a lot easier than cooking them in a pot, which gives you limited access and view to the ingredients you’re mixing in, or a pan, which is not big enough to mix your ingredients in, especially if you’re cooking large amounts for a party or family gathering. The cast iron wok is your best solution for this. Not only will it unlock the delicious flavors, but it will also make cooking easy and fun to do!

Using a wok while cooking is all about the wok hei, literally translated as “break of a wok”, which is “that complex charred aroma that fleetingly cloaks the piping-hot stir-fries” (Michelin Guide). Do you know that smoky flavor in Chinese dishes? That’s the one!

Imagine then, the delicious flavors that you can unleash when you cook soup with a wok. There’s no secret ingredient to add or special steps to insert. You simply need to follow any soup recipe the way you would if you were going to cook it in a pot and let the wok hei do all the magic.

Just as with cooking rice and noodles, the sloped sides of the wok also make it easier to stir your ingredients in. It’s also recommended to cook in small batches—never in double portions—so that the freshness of your dish or soup remains the same.

From poaching to scrambling to frying an omelet, the wok will let you cook your eggs any way you want them to. Eggs, while they can be cooked in countless ways can be tricky if your pan isn’t hot enough. With a cast iron wok, however, that’s no problem at all as long as your wok is well-seasoned.

If you’re poaching or even boiling some soft- or hard-boiled eggs, the water will boil in no time.

Looking to make a quick dinner after arriving home late? Try cooking burger patties on the sides of the wok so you can cook several at a time. It’s not your regular way of cooking burgers, but it works! All you need to do is add a splash of oil and swirl your seasoned wok to coat the sides. Once it begins to smoke, you can place the patties all around the sides and turn it around using a spatula.

The best thing about this is that you can also cook onions or mushrooms in the middle of the wok while collecting the drippings from the patties that you are frying on the sides. Imagine the aroma and how delicious your dinner will taste! Once the meat is cooked to how done you would like it to be, you can pop it into a bun and add your desired dressing, and you’ll have your dinner ready in almost no time at all!

No need to struggle with stirring or turning around your mussels (or other kinds of shellfish) because a cast iron wok will make it easier to stir your seafood. With it, you will learn the concept of “tumbling” which is lifting your food (in this case, your mussels) around to make sure that all sides are evenly cooked. This is ideal if you want to prepare a quick lunch to take with you to the office or you want to take something easy to prepare for a family dinner.

The wok was designed to cater to quick recipes, with the way its shape distributes heat evenly to speed up cooking, which is perfect if you are rushing to go somewhere. You also no longer have to wait long for your mussels or oysters or other seafood to cook, but can promptly saute or stew it in your cast iron wok.

Your wok isn’t just good for Asian recipes or frying ready-made burgers, but you can use it for a variety of dishes from diverse cuisines. If you feel like having Mexican fajitas for dinner and don’t know how to prepare it, take out your wok and do the stir-frying there!

What’s best about it, and saves you space and the hassle of having to wash several frying pans later, is that you can heat your tortilla at one side of the wok after you’re done frying your fajita mix so that the tortilla remains warm. For added flair, you can even serve the wok on the table with the fajita and the tortilla.

We’ve said before that the cast iron wok isn’t good for just stir-frying your food or creating soups. Did you know you can steam fish and vegetables in your wok? All you need is to fill your wok with a couple of inches of water and use a collapsible pot steamer (check out this one by Bealy).

You can pile your vegetables onto the collapsible steamer directly or you can also put your fish in a small dish and place it on top of the steamer (especially because fish meat disintegrates fast if not handled carefully). Steam your meal for a few minutes and season lightly for an all-healthy diet!

A wok works wonders when you need to deep fry just about anything, from chicken to shrimp tempura to vegetables. When I deep fry with a wok, I try to make sure the food I’m cooking is in smaller pieces so that the sides are all evenly cooked.

One other benefit of deep-frying with a cast iron wok is that it saves you on a lot of oil. Because of the way it is designed, with the sides sloping toward the center, deep-frying in a wok allows the frying oil to pool towards the center. That way, you don’t have to use too much oil even when you’re deep-frying.

Now that you’ve seen the different kinds of amazing dishes you can cook in a wok, don’t you want to try it out?