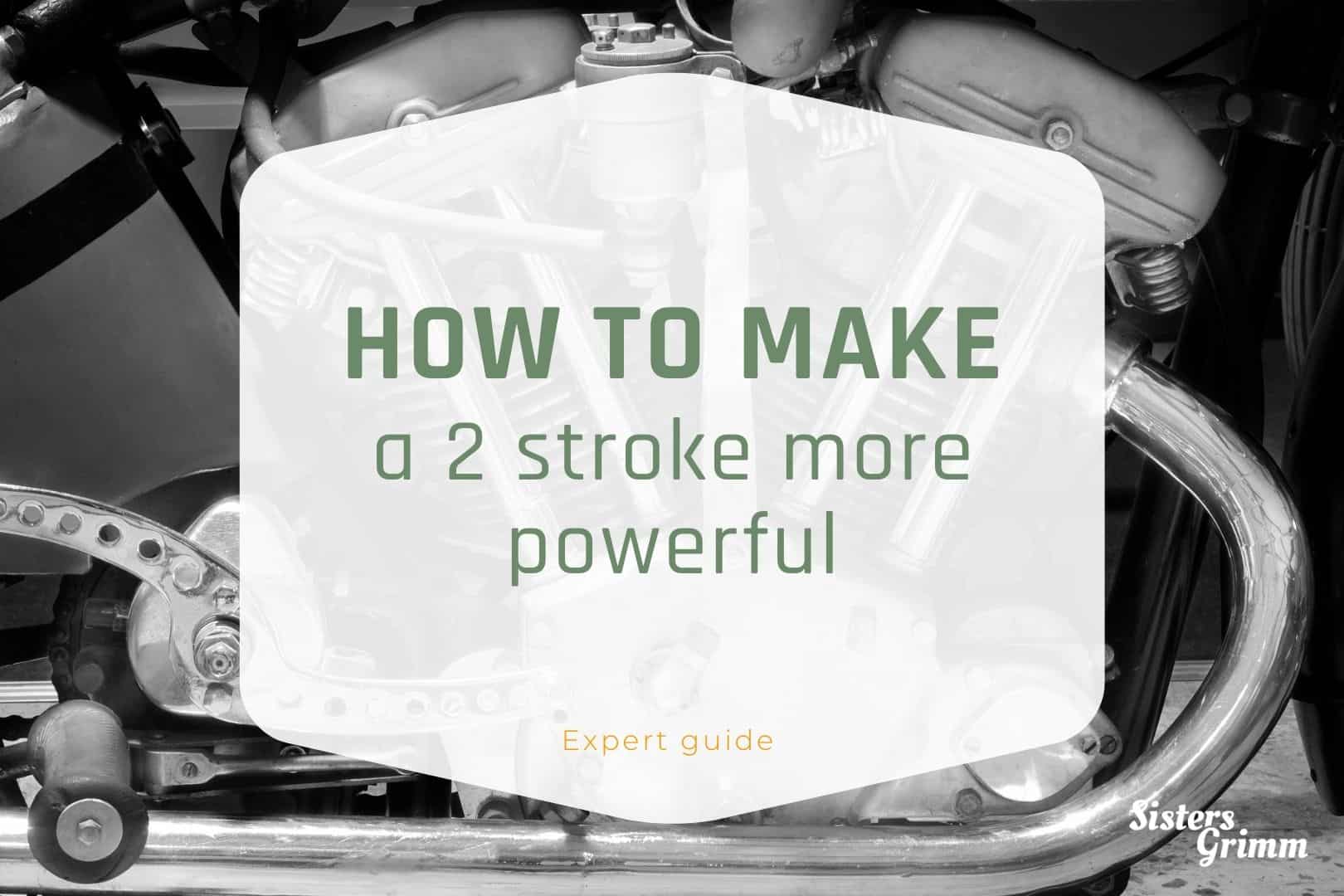 Don’t let your 2 stroke hold you back power-wise…

Not when you can implement a couple of simple hacks to give it that long-overdue performance edge when out there.

Below we show you how to make a 2 stroke more powerful and make your racing beast the talk of the town.

Note that modifications we cover are helpful for anything with a 2 stroke engine – chainsaws, weed eaters, ocean-going merchant vessels, and more.

How to make a 2 stroke more powerful

And the good thing is that most won’t break the bank.

Reed valves have been used for years in high-performance versions of two-stroke engines to control the fuel-air mixture flowing to the cylinder.

Specifically, a reed valve functions as a one way check valve so the mixture flows from the carb to the crankcase only.

This is important as it prevents the reverse flow of the fuel-air mixture to the carb meaning that the combustion chamber is only reloaded with fresh mixture.

This helps improve the power output by many two stroke engines.

Try adding an accomplished reed valve system such as  Boyesen power reeds  and see if it will do the trick.

Once you’re through with the reed valve, it’s worth turning your attention to the squish gap.

For starters, this is the distance between the piston (when it’s at the top dead center of the compression stroke) and the combustion chamber (top or head).

More important is the fact that you can add the power generated by the engine by reducing the piston to head clearance.

It’s not even complicated…

Just sand down the head (or even the cylinder) or get someone to do it and see if it will take care of the power problems.

Here is another reason why your engine feels pretty awful:  it’s not properly jetted.

And as you likely know, it can’t run the way it’s supposed to and you will keep losing to your buddies if you don’t do something.

This is no good and you could even be risking an engine detonation.

You have no shortcut when it comes to this and you must down jet the engine to the edge of the detonation to have it produce optimal power.

Word of caution: aim to get the perfect balance (neither too rich nor too lean) when jetting to avoid hurting the engine.

The other common suspect is the exhaust pipe and you don’t want to overlook it.

Here is the thing: your 2 stroke engine will never reach its full potential if there are resistance issues in the exhaust.

Getting rid of these troubles is not as difficult as you may have thought.

Simply take a close look and remove any restrictions or any stuck stuff inside the chamber.

Research has shown that there’s some improvement in power with a modified intake system compared to original intake systems and it’s a procedure you may want to test.

Make no mistake- we don’t want you to replace the whole system.

Instead, we recommend that you straighten and shorten the intake length moderately.

This might promote better flow (the extra length sometimes impedes the flow), breathing new life into your engine.

A lot of owners report having the biggest gains after making changes to the ports and it could be the magical pill in your case as well.

As a rule of thumb, you should have the exhaust, intake, and all the transfer ports enlarged and shaped.

This benefits the engine greatly and is one of the guaranteed ways of boosting performances in equipment featuring 2-stroke engines.

You may need to advance or retard the ignition timing too.

This is simply the timing at which a spark is released in the engine’s combustion chamber.

Now, having the best timing set is vital because the engine will be bogged down if the sparks occur too soon or extremely late in the cycle.

A likely sign of bad timing is excessive vibrations.

Tip: Typically, you will need to change the ignition timing settings anytime you have completed major engine changes/upgrades to achieve wider peak power.

Sometimes the stinger ID is a bit large (manufacturers don’t want to risk you blowing up the setting) and that might be hampering performances.

If that is the case, the best approach is to invent and insert a form of restriction to the stinger ID.

Getting the rightly sized restriction is more of trial and error as you don’t want to go overboard, again risking a detonation.

How to make a 2 stroke more powerful: Other helpful solutions

From the word out there, there are a few other steps that could be effective.

You can buy the right carb inserts to enlarge the diameter of the carb.

In general, a carb with a bigger diameter works best for higher RPM power bands.

You can send it out to a technician to install power valve spacers to the chamber.

They open up the power valve earlier making extra power.

We know that this is controversial and some feel that high octane fuel makes an insignificant difference. That said, some seem to have been luckier and endorse higher grade fuel.

Can you test it on your small engine?

That shouldn’t blind you to the fact that you can extract more power out of the engine and give your friends a good run for their money.

We have shown you how to make a 2 stroke more powerful and the ball is now in your court. If not, check out this video.