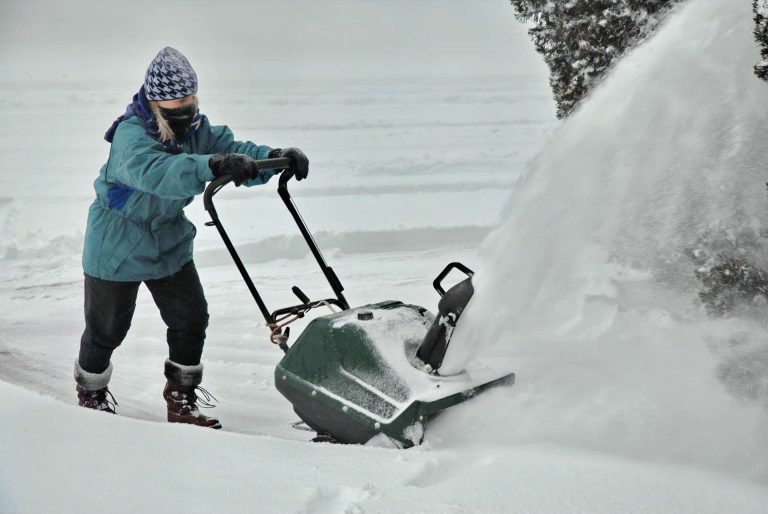 We all agree that snow blowers are wonderful machines when it comes to pushing the white stuff from the yard.

And often the choice is between 2 stage models and the pricier 3 stage snowblowers when shopping.

So, which snowblower should you go for?

Our 2 stage vs 3 stage snowblower comparison article will help you make a wise pick for your home.

To make things easier for you, we will look at the design of the two machines first starting with two-stage models.

So, what is a 2 stage snow blower?

Now, 2-stage snowblowers feature a collection auger and an impeller.

As a result, a two-stage model such as Toro 2 stage snow blower throws snow in two steps because of this construction hence the two-stage name.

How a 2 stage snowblower works

Stage 1: In the first step, the rotating auger collects the piles of snow and pulls them into your machine.

In essence, the device transfers the accumulation to the center of the machine in preparation for the second and final stage.

Stage 2: In this last stage, the gathered snow is blasted out through the chute.

The best 2 stage snow blower can throw snow faster and shoot it farther thanks to the typically powerful motor.

Construction-wise, a 3-stage machine copies a 2-stage type of snowblower a great deal.

To be precise, the two primary components in two stage snowblowers – the auger and impeller- form the foundation in 3-stage brands too.

The other obvious similarity is the use of self-propelling systems in both types of devices.

The difference, however, comes in the addition of a third auger (also called an accelerator) running perpendicular to the first collection augers.

To understand how significant this innovation is, let’s look at how the machine operates.

How a 3 stage snowblower works

You probably know that it’s called a 3-stage because it will blow snow and ice in three distinct stages.

Stage 1: Snow is collected and ‘sucked’ into the machine by the auger.

Stage 2: The auger feeds what it has scooped up to the impeller where it will be discharged still through the chute.

Stage 3: This stage is really handy if you’re dealing with heavily compacted snow that you need cleared fast.

You see, the additional auger drifts and crushes the stubborn white stuff into slush to help the machine easily jettison the high volume material out in no time.

These machines, therefore, give you a massive performance advantage on the days you’re battling serious snow accumulations on your gravel driveway, sidewalk, etc.

And the good news is that the best brands can throw incredible distances (75+ feet away).

2 stage vs 3 stage snowblower: when to use each

Keep reading to discover when it’s more suitable to invest in either model.

When to use 2 stage snowblower

Overall, you’re likely to be okay with a two-stage model unless you regularly experience heavy snowfalls during winter in your region.

To be frank, these blowers are very well built and handle all types of snowfalls on any surface amazingly well.

This makes these machines a more valuable investment for most homeowners not least because they’re pretty easy to maintain.

The other reason that favors this popular equipment is their friendlier engineering.

For example, the leading brands come with heated handgrips making them extremely easy to use even for seniors.

How to keep snow from sticking to snowblower

When to use 3 stage snowblower

On the other hand, 3-stage snow blowers are magical when it comes to the toughest stuff.

Think of larger clumps that are a couple of feet high and intensively compacted and other difficult conditions that you could face after a snow storm.

Believe you me, the three-stage models make short work of such- it doesn’t even spare the densest, crusted layers- largely because of the extra accelerator feature.

Subsequently, these beasts are best for professionals and people who need to take care of high-capacity jobs occasionally.

Of course, you have to pay more for these animals but trust me, it’ll be money well spent.

2 stage vs 3 stage snowblower: other considerations

This section looks at several other issues that you may want to keep in mind when choosing between the two types of snowblowers:

Generally speaking, a high-powered machine is more efficient and faster if you’ve got an expansive area to clear, for instance, a wide patio or long driveway.

The most powerful two-stage machines will do quite fine but you’re better off with a heavy-duty 3-stage snow blower if the snow is compacted or heavy/wet.

For hills and steep terrain, go for a snowblower with tracks (resembling those on tanks) because of the improved traction, regardless of whether it’s 2 or 3-stage.

But if you want rapid breaking down of wet ice and snow at the same time, we recommend a three-stage snow blower.

Otherwise, any top-rated two-stage unit equipped with superior features such as a larger mouth and higher ground clearance should be up to the task on uneven terrain.

Type of oil for snowblower

You’ll need larger space in your storage shed because they tend to use up more room.

In summary, two-stage snow blowers are more practical for residential uses because of their simplified design and compelling snow throwing powers.

On the other hand, three-stage snowblowers are more suited for heavy snowfalls and most commercial operations because they clear the toughest snow fastest and shoot it the farthest.

The other option – and most people forget this- is single-stage snow blowers.

This is the most affordable choice but it’s only ideal for light to very moderate jobs.