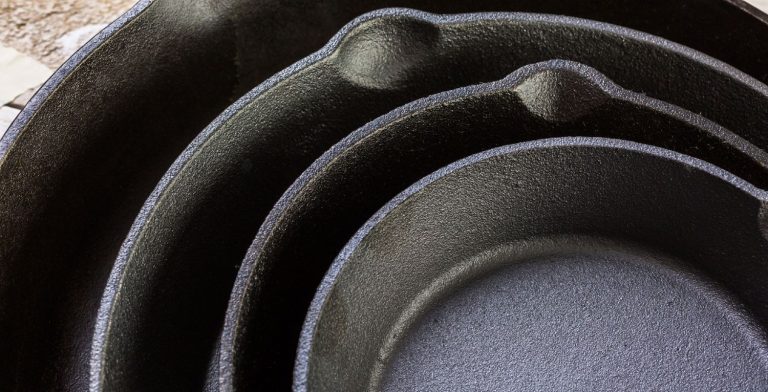 Cast iron cookware is fantastic for multiple reasons, but works best when properly cared for. Fortunately it isn’t rocket science, and with a little knowledge and effort you’ll get fantastic, reliable cookware that lasts you a lifetime.

New cast iron cookware is usually pre-seasoned, and there’s a reason for that: When packaged and kept in a storage facility or shop, there’s no way of telling how long it’s going to sit on a shelf and how the ambient climate is going to be.

In order to prevent your new cast iron cookware from rusting before even unwrapping it, the manufacturer pre-seasons it. By doing so, the cast iron is protected during storage and you’ll get cookware that is ready to use right off the bat.

Although your new cast iron skillet or pan is claimed to be pre-seasoned, you definitely want to clean it prior to the first use.

The most consistent advice we’ve seen online and we follow ourselves, is to clean and season a new cast iron skillet. Or an old one obtained from an attic or thrift store, for that matter.

You want to make sure your cast iron cookware is thoroughly cleansed prior to the first use. This is also one of the only times you should use dishwashing liquid during cleaning, as it removes grease and potentially breaks the seasoning.

This should be done promptly after you washed it, and we’ll explain this step in detail down below.

How to easily season (or re-season) cast iron

Seasoning cast iron is easier than you might think, but it might take a bit of time and practice to get it right. However, once you get it right and you get familiar with using your new cookware, you’ll be happy that you made the switch.

We have great faith in cast iron cookware manufacturers, especially the ones that still manufacture their own products at local facilities – such as Lodge. Here’s their explanation of the seasoning process as a whole:

“Seasoning is just oil baked onto cast iron through a process called polymerization. It gives your cookware that classic black patina. Seasoning forms a natural, easy-release cooking surface and helps prevent your pan from rusting.”

Below is the seasoning method we use ourselves. We think it’s the best method, and very straight forward as well.

Washing your cast iron prior to seasoning is a great idea as it will remove any residual grease and give you a surface as clean as possible to work with. You can use soap if you want, but make sure you rinse it properly.

2. Apply a thin layer of oil

You want to be extra careful when applying the oil, and only apply a very thin layer. The oil is required to have a high smoke point, and we recommend going with grapeseed oil, peanut oil, canola oil, or avocado oil. Foodsguy has a list of 9 best seasoning oils that you can check out for further information.

If too much oil is applied at once, the cast iron may become sticky. Wipe off any excess oil, if you accidentally applied too much.

The easiest way to bake your cast iron cookware is to slide it in the oven for an hour at 450-500 degrees F for 60 minutes. This allows the oil to polymerize, resulting in the creation of a hard, non-sticky layer.

Let it cool down to room temperature.

Now that your cast iron cookware has been baked in the oven, it’s time to inspect the final results. This is easily done by running your hand over the surface, and feeling for any inconsistencies in the surface.

Ideally, you want the surface to be smooth with no stickiness. This might not be achieved by a single seasoning process, but continued use will eventually form the desired layer. OR you could apply another layer of oil and bake it one more time, if you want a stronger/thicker coating.

The surface of the cast iron darkens as it’s seasoned, which is normal.

How often do you need to season cast iron?

Reddit has an interesting thread discussing this question, and it seems like nobody is following the same routine with their cast iron cookware.

If you don’t use your cast iron cookware as often as you’d like, we recommend that you season it once or twice every year. Make sure you inspect it once in a while too, to ensure that rust isn’t suddenly forming on the surface.

How to fix sticky/gummy cast iron

If your cast iron cookware turns out sticky or gummy after seasoning, it either didn’t get enough heat or enough time to bake.

Fortunately it’s an easy fix: Simply put it back in the oven, and let it sit until the stickiness is gone. It might take another hour, but eventually the oil will polymerize and form the desired smooth layer.

If you’re interested about the science of seasoning, Lodge has an interesting page that goes in depth with this topic.

How to clean cast iron after cooking

According to Lodge, this is how easily you can clean your cast iron cookware after use:

Wash your cast iron cookware by hand. Use a small amount of dishwashing liquid, but this is optional and should be limited to only a few drops. If you use too much soap, you can strip off the seasoning and you’ll have to season your cookware over again.

You can use a pan scraper or a bristle brush to get stubborn, stuck-on food off. If this doesn’t clean the cast iron properly, you can simmer some water for a few minutes and leave it until it has cooled down. This should soften up any stuck-on food, allowing you to easily wash it off.

If you notice a little black residue on your towel, it is just seasoning and it’s completely normal.

3. Apply a light layer of oil

Before stowing your cast iron cookware away, rub a very thin layer of cooking oil onto the surface. You could also use a seasoning spray, but a cooking oil with a high smoke point is great as well.

After applying a thin layer of oil, wipe the surface off with a paper towel until no visible oil residue remains.

When is cast iron cookware clean?

Cast iron cookware isn’t supposed to be sparkling clean after use. Actually, the layer of oil and fat is supposed to bake onto the surface, as it allows for less stickiness and better cooking.

Whereas stainless steel or non stick cookware are supposed to be cleaned thoroughly after cooking, cast iron should only be superficially cleaned to prevent stuck-on food from going bad. The layer of fat and oils stuck to the bottom and  has been polymerized, and works with the seasoning to provide a great experience and taste to your food items.

So, when is it actually considered “clean”? When the surface is just black with no visible food residue, it is considered clean.

Can you put cast iron cookware in the dishwasher?

This is a hard no. Dishwashers make use of a different type of soap that’s harsher than your regular dishwashing liquid.

How to store cast iron cookware

If you want your cast iron cookware to last longer without rusting or seasoning chipping off the surface, you need to take a few measures during storage.

First of all, there’s a difference between short-term and long-term storage. If you’re storing your cast iron cookware short-term and use it every day, you’d want to store it in a way that it’s easily accessible. But if you’re placing it in long-term storage, for instance if you have a special dutch oven that you only use for camping trips, a few extra measures should be considered.

When you’re storing your cast iron cookware short-term, you don’t have to be as careful and considerate as if you were storing it over a longer period of time.

The best way to store your cast iron cookware and keep it easily accessible, is to invest in a heavy duty pan organizer. That way every piece of cast iron cookware is stored separately, allowing for air to flow freely in between them, with no risk of accidentally bumping them into each other and ruining the seasoning.

Other ideas for short-term storage can be found on WikiHow, with one idea being to place a piece of paper towel between stacked pots and pans to prevent scratches and other damage.

For long-term storage we recommend that you carefully apply a layer of cooking oil prior to storage, to make sure the pores of the cast iron are fully saturated. Wipe off any excess oil until the surface appears to be “dry”, and carefully wrap each piece of cookware in a dishtowel.

Find a dry spot to keep it, ideally indoors as you’d want to store them in an area where the temperature keeps stable.

Check up on your cookware once in a while every 6 months or so, to ensure that it isn’t rusting.

Why does cast iron rust?

It might seem like cast iron can rust out of nowhere, which is actually partially true. If stored in a moisture-prone environment or in a place where temperature fluctuates during day and night, you will eventually start seeing rust on the surface.

As with many other metals, cast iron is susceptible to rust and must remain dry and well-seasoned to prevent it from deteriorating. The best way to do so is by using it frequently and not soak it in water or load it into your dishwasher, as too much exposure to water will make it rust quickly – even if it’s seasoned.

How to remove rust from cast iron

Since cast iron is extremely susceptible to rust, it’s not uncommon to suddenly see rust forming on the surface. Even with proper care and maintenance rust can appear in less than a day, but fortunately it’s very easy to remove and require nothing but a few basic household items.

There are two methods that will help you remove rust from cast iron: Steel wool and elbow grease, or white vinegar and a soak.

Steel wool is a fantastic option for this, as it effectively removes any surface rust with just a bit of elbow grease. This method is easy and straightforward: Scrub until it’s clean and rust is gone. For more details, take a look at Kitchn for a full step-by-step guide.

Once it’s gone, make sure you re-season the cast iron thoroughly to prevent it from rusting again.

Over on bon appétit a vinegar soak is recommended if the cast iron is severely rusted out. Mix equal parts of water and white vinegar, and make sure there’s enough to fully submerge your cast iron cookware. Allow it to soak for up to 8 hours, but check on it regularly and pull it as soon as the rust is gone to prevent the vinegar from damaging “healthy” parts of the material.

How to maintain cast iron cookware

The best maintenance is actively using it. The fats and oils from cooking prevent the cast iron from rusting, and with a little extra coating of oil after every use it stays good for a lifetime – and sometimes more.

These are the most important things to consider and remember, if you want to take good care of your cast iron cookware:

These are the sources used in our research for this guide.