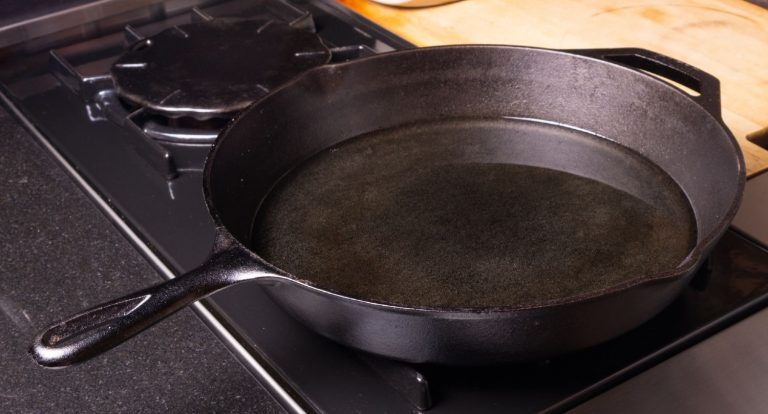 First and foremost, the pre-seasoning is necessary to prevent the cast iron from rusting during storage in a warehouse or while it sits on store shelves.

Pre-seasoned cast iron cookware also gives the consumer a chance to get started easily, as they are easy to use right out of the box. However, you might want to consider a few things before taking your new cookware into use.

How is cast iron cookware made?

Lodge is one of few American manufacturers who pride themselves in making cast iron cookware the traditional way in their own, local facility in South Pittsburg, Tennessee.

Most cast iron cookware is made through sand molding, which literally means that molten iron, steel, and other ingredients are poured into a mold made of sand.

Sand holds its shape because its melting point is higher than iron, but how are the sand molds shaped? This video explains the process from start to end in a detailed way, so you can learn how the sand molds are made and how it ends up as cast iron cookware.

To sum it all up, this is how cast iron cookware is made:

Why is cast iron pre-seasoned from the factory?

What most people probably don’t realize, is that raw cast iron cookware is actually grey. But with the pre-seasoning applied from the factory and baked on, it turns black.

When cast iron cookware is seasoned oils and fats are applied under high heat to allow polymers to form a so-called seasoning layer.

The seasoning layer is made of carbonized oil, which has been baked onto the cast iron and sealing the pores of the metal and creating a protective layer.

When factories pre-season the newly made cast iron cookware, they do so for a reason. The oil not only acts as a smooth layer of non-stickiness, it also protects the surface from rusting.

Cast iron is very susceptible to rusting, and must be pre-seasoned to prevent it from rusting before you even get the chance to unpack it.

The pre-seasoning also enables you to get started cooking right away, without having to apply initial layers of seasoning yourself.

Do you need to re-season new cast iron cookware?

According to The Food Lab on Serious Eats, pre-seasoned cast iron cookware should get an extra layer of protection prior to initial use.

We think this makes perfect sense, as there could be missing spots of seasoning on your cookware, and with an extra layer of seasoning you’ll make sure it’s properly sealed and protected against rust.

If you’re unsure about the origin of the cast iron cookware and it has been pre-seasoned from the factory, we recommend that you strip the factory-seasoning and re-season from scratch to ensure a proper oil is used in the process and your cookware lasts as long as possible.

How to strip the factory-seasoning?

We’ve found two useful ways to strip the factory-seasoning (or a bad seasoning) from the Homesteading Family, who recommends to either strip it using a firepit or a self-cleaning oven.

1. Using a firepit or a wood-burning stove

This method can be achieved by anyone with access to an outdoor area or a wood-burning stove.

Simply make a fire as you’d usually do to stay warm, and once the coals are burnt down you add the cast iron cookware and leave it overnight.

The following day you pick it from the ashes and clean it as you would normally do with cast iron cookware.

This is going to create smoke and odors though, so make sure you’re able to keep your windows open during this process.

Once it’s cooled down, you take out your cookware and clean it.

You can now re-season it from scratch. Check our cast iron care guide for further advice.