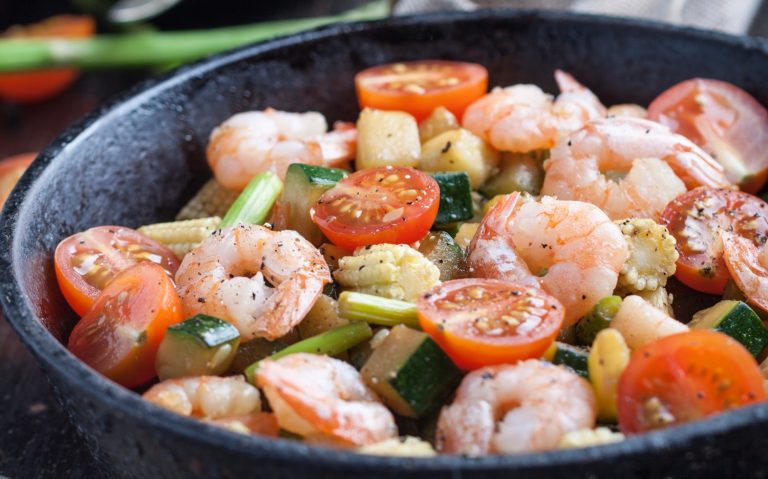 One day I randomly came across a cast iron wok at my grandma’s house, and I remember asking her if she bought it in a yard sale because it seemed a bit rusty. Her answer shocked me. It turns out this wok has been in the family for decades, but she forgot about it after she moved to a new house, and she just recently stumbled upon it while going through some things in her basement.

Amazed by this finding, I headed home and started browsing the web. I quickly came across this guide on YouTube, and thought “heck, this might work for the wok as well!”. But I had to clean it up first though, and get rid of the rust.

However, after a few hours of scrubbing I almost gave up. The rust seemed to be deeper than I originally thought, and I remember myself thinking “this wok is completely done for. There’s nothing I can do”. But. For some reason I was curious and really wanted it to work, so I found another video and boom! Shortly after the cast iron wok was back to normal and ready to use. After a good seasoning I started using it, and it quickly became my favorite wok.

Moral of this story is: A cast iron wok can actually outlast you, because of how durable it is. It endures everything, and you can use all sorts of metal tools on it. Just make sure it’s oiled between use (also called “seasoned”), and it will perform well for generations. 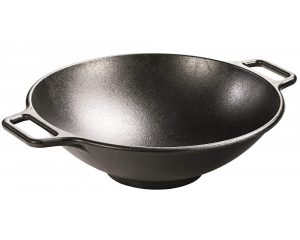 What we like: Lodge P14W3 Pro-Logic is a classic American piece of cookware, and to this date they still produce their cookware as they’ve been doing since the late 1800’s. Their factory is located in South Pittsburg, Tennessee, and it’s been there since 1896. You know this is a sign of a healthy company, and this is also one of the favorite cast iron woks on the market. We like it too, because of how simple it is, and at the same time it’s actually one of the more affordable options. So if you’re unsure what to choose and just need a quick buying advice, THIS is your next cast iron wok, and with no doubt one of the best ones on the market.

All you need to know: Lodge P14W3 Pro-Logic is a cast iron wok with a diameter of 14 inches. Lodge is known for having a more coarse surface than other brands, but by some people this is considered a quality, because it makes it easier to absorb the oil and make a proper seasoning that will last a long time.

The cast iron wok comes pre-seasoned, but it’s recommended to season it at home before use.

High-quality US made cast iron wok 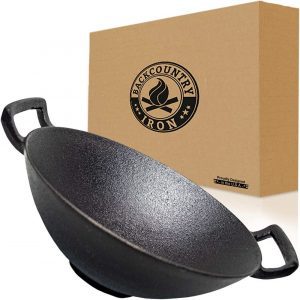 What we like: The Backcountry Iron’s Cast Iron Wok is extremely well made, and it comes in a beautiful packaging as well. This wok deserves your attention if you like proper craftsmanship and want to support small, local businesses instead of large corporations. It is loved by many users across multiple online stores, and we enjoy its durable, rugged design as well. The wok comes pre-seasoned and ready to use on any cooking surface, even induction.

All you need to know: This cast iron wok is made by Backcountry Iron, a US-based company that specializes in handmade cast iron cookware and proper craftsmanship rather than mass production.

It’s a 14-Inch cast iron wok with large, useful handles and a flat bottom, that enable you to handle it easily and use it on any cooking surface in your kitchen or outside.

It comes pre-seasoned, but as with any other cast iron cookware, we recommend seasoning it before use to ensure the entire surface is completely non-stick. 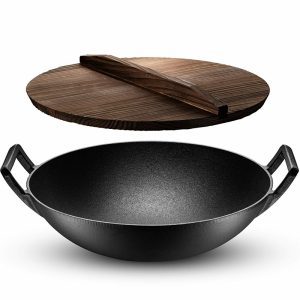 What we like: If there’s one cast iron wok we love, it’s this one. It might not be the cheapest one, but it comes with a wooden lid. What more could you wish for? Wooden lids are a rare sight these days, and it’s actually worth buying just because of that… jokes aside, this really is a great cast iron wok, and you won’t go wrong if you buy this one. 14-inch diameter gives you plenty of space to cook whatever you want, and with the lid there’s no limit of the usage for this wok.

All you need to know: The Klee Utensils cast iron wok comes with a wooden lid, and it has two handles as well. The bottom base is flat so it can be used on multiple heat sources, including induction, so you don’t have to worry whether you can use it or not. 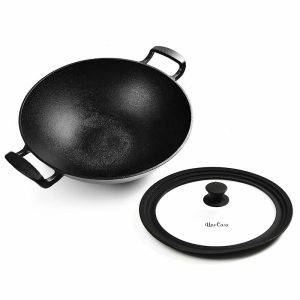 What we like: We like being able to watch the food as it cooks, which makes this cast iron wok a perfect choice. Here you get a regular cast iron wok but with a glass lid, so you can see the progress without opening the lid midway and risk loosing heat. It has silicon edges too, so it gives you a proper seal while cooking.

All in all, we must say this is a true favorite among cast iron woks, and definitely among the best ones out there.

All you need to know: The Una Casa cast iron wok comes with a see-through lid and large handles, so you can carry it around without worrying about scalding your hands. The bottom is also flat and a bit wider than other woks, so the heat might be distributed more evenly here.

It measures 12.5 inch in diameter, which is a bit smaller than other woks. However, this also means that it doesn’t take up as much storage space, which is a good thing.

Here’s why everyone should own a cast iron wok

With a cast iron wok you can cook almost anything. From fried dishes to stews, the list goes on and on.

The fact that it’s made from cast iron doesn’t only mean that it lasts forever, but also that it retains heat for longer, giving you a bette sear on anything from meats to vegetables.

If you’re wondering what you can make with a cast iron wok, here’s a list of 9 things you can cook in it. The list includes:

The list is of course much longer, but these are just some of the things you can make with your cast iron wok.

If you’ve been wondering whether a cast iron wok is good for deep frying or not, here’s the short answer:

Because of how well they retain heat, you won’t experience the same temperature drops as you normally would in a regular steel wok.

It takes a little longer to heat up though, but with a stable temperature you’ll be able to get a delicious, crispy crust as well as keep the meat juicy and tasteful.