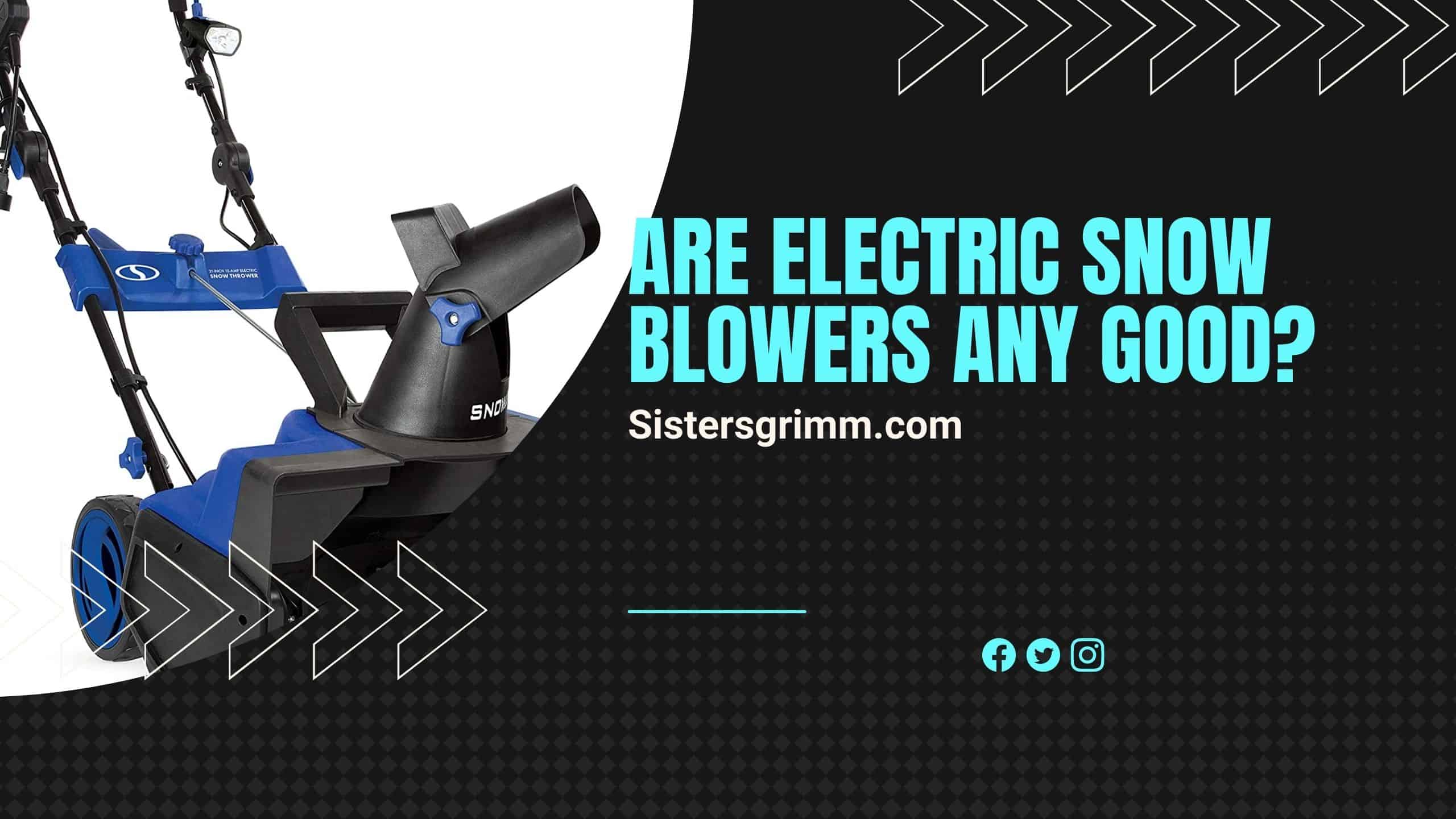 I’ve used shovel to scoop snow from driveway and walkway more times than I can count.

Electric snow blowers are good for clearing snow at most a foot deep. They’re lightweight enough to clean snow off both driveway and walkway.

They’re compact to fit in tight spaces such as decks and patios where gas powered models can hardly reach.

Built even for the first time user, an electric snow blower tends to be a far better option than a gas-powered model because it’s eco-friendly, quieter, and very easy to use.

If you’ve decided that you’ve had enough of manual scooping, you want to upgrade to a more efficient snow blogging technique, and you’re wondering if an electric model is worth it, this guide is for you.

Are Electric Snow Blowers Any Good?

Gas blowers are so powerful that they can blow more than an inch deep snow.

And while they require more for maintenances, their endurance far exceed the 50 square feet that electric blowers reach.

So if you wish to clear a large area, no matter how long or deep the snow is, you will find a gas powered snow blower quite useful.

While they aren’t limited by cord length, they’re too big to fit in tight spaces and elevated surfaces. Also, they’re loud, difficult to transport, and burn fossil fuel, which pollute the environment.

Corded snow blowers are powerful enough to through up to 70 pounds of snow every 60 seconds. The problem is the cord length might limit you if you intend to blow snow from a larger area.

However, you can use an outlet and a cold weather extension to make your work easier.

Consider them only if you have a small space with light snow to clear. You also have to mind battery runtime per charge, although you can get a standby battery.

Electric snow blowers have their benefits and limitations. So it’s important to look at both to determine if they’re any good in the first place.

The Pros and Cons of Electric Snow Blowers

To begin with, there’s more to an electric snow blower than just being cheap to buy and quiet during operation. Here are three benefits that make them stand out:

Although they struggle to handle wet, heavy snow, electric snow blowers are so effective in clearing snow that’s at most a foot deep. Not only are they efficient at clearing a little more than a foot of snow, they’re also not as expensive as the gas-powered snow blowers.

We can praise anything gas-powered for their efficiency all we want. But that doesn’t change the fact that fossil fuels harm the environment more than we’re willing to admit.

So while gas-powered snow blowers are powerful enough to clear wet, heavy snow, they pollute the environment and contribute heavily to climate change.

For those of us who are environmental conscious, who want to make the world around us a better place, while surviving in the falls season, an electric snow blower can make a big difference.

3. Electric Snow Blowers are easy to use

Electric snow blowers not only require far less maintenance, they are also easy to use. You will have to mind the cord, though, making sure it doesn’t get in your way as you work.

And if you intend to work farther away beyond the length of the blower’s cord, you will need to get an extension.

Unlike gas-powered models, electric snow blowers aren’t heavy-duty machines. So while they may be ideal for small jobs, they won’t be quite as effective in clearing heavy or wet snow.

More often than not, the limit to their endurance doesn’t exceed 50 square feet, which means they’re only effective for smaller jobs.

Does an electric snow blower work better than a gas-powered model?

Although they’re quieter and environmental friendly, electric snow blowers aren’t as powerful as gas-powered models. They’re efficient for clearing about an inch of snow, beyond which they struggle to scoop more out of your path.

So if you intend to clear twice as much snow from your dwelling with quick passes, it’s best to invest in a gas-powered snow blower.

Is a gas-powered blower more powerful than an electric model?

Gas-powered snow blowers are more powerful than electric models, which is why they are more effective for clearing snow that’s more than an inch deep.

And while they are more expensive than the electric models are, they tend to power through heavy and wet snow quite well.

Electric vs batter snow blower: which is better?

If you don’t want to be limited in terms of range, you should consider getting a battery-powered snow blower.

If you can navigate through the snow just fine with the corded model, especially in a small area, a snow blower powered by electricity should do. The level of performance is the same.

Do I need to plug-in an electric blower throughout a task?

Unless it also works with a battery, you will need to plug-in an electric blower to a power outlet for it to work. You may also need an extension cord rated above the machine’s amperage to get this to work very well for you.

Although electric snow blowers have their limitation in terms of power output and depth clearance, they’re still useful in areas where the snow isn’t too deep.

So if you want to get rid of snow that’s just an inch deep from the driveway, pathway, pavement, patio, or deck, you will find an electric snow blower to be good enough for the job.

What is a snowblower urban dictionary